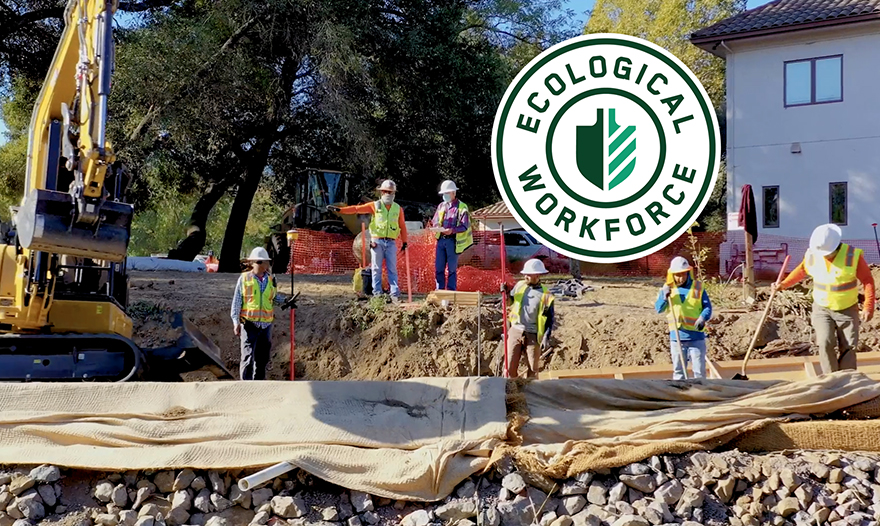 Pam Campbell, Inquiring Systems Inc.: We have a very cool new project, a certificate program called Ecological Workforce Initiative. The startup funding is coming from a construction corporation that long ago had set up a philanthropic arm and really cares about the land here in [Sonoma County], north of San Francisco. They were getting all kinds of ecological renovation projects, but they realized the people they were hiring had no special training and thought nothing of running over frogs or pouring dirty water into the creek. So they created an educational certificate program for people who might choose not to go to a four-year college but can get certified and become skilled in ecological restoration. This idea of having certification for skills that they can put on their resume — I like that a lot. The project shared with me how proud these guys are about the program, bringing their family out on the weekend to show them the work they’ve been doing. There’s just such pride in ecological restoration. [Watch an excellent 6-minute video about the project.)

Mike Strode, Open Collective Foundation: I was reviewing an application for a project, Themmoirs Creatives Collective, that included a pitch video about its story-telling circles, circle keeping, sharing. It originates out of Chicago and has collaborators in other states. As I was reviewing the video, I saw a face that looked familiar — turns out it was Malia Obama. I was very excited to see that, the child of a recent president, and I was impressed that the facilitator in the video intentionally maintained the integrity of the space, keeping it confidential and affirming, even for someone with a very public profile. It’s a great project in general that stresses healing and justice through writing workshops and performances, and we decided it was a good candidate for hosting. Seeing Malia was a little bright light in the review process, a spark of joy.

Oliver: I’m going to talk about two Social Good projects. The first is called Shape Up the Vote, a group of people in Philadelphia and New York with a unique insight who work tirelessly to make it happen. Their insight was that communities in the neighborhoods where we need to turn out votes often gather in barbershops and salons, so the project turns those into places for getting people signed up to vote and educating them. It’s nonpartisan and drops off packets of information at these barbershops and salons, and encourages people to register to vote — it was tremendously successful in the 2020 election. The second is the Fireside Project, based in the Bay Area, that’s the world’s first psychedelic hotline. “Real time help for when time does not seem real” is its tagline. A lot of people go to the emergency room when they’re having psychedelic experiences, and it turns out that can be prevented from happening by talking with trained peers. The psychedelic peer support line helps people feel safe and valued. This was an idea that has taken off. The project director has been profiled in Forbes and the New York Times, because psychedelics are a hot topic right now.

Shava Lawson, Seattle Parks Foundation: I’ve recently noticed a new influx of partners that are coalition-based groups coming together to address an issue. One of those projects is Community Land Conservancy, a BIPOC-led organization that’s working to purchase land to be reserved for parks and open space in communities of color, for and by communities of color. Another organization we just onboarded is Emerald Alliance, working to build a multicultural coalition to address policy and advocacy issues that prioritizes land conservation, healthy people and livable communities in Puget Sound. It’s heartening to see coalition and alliances forming to address systemic issues rather than attempting to just patch a small part of the problem. We still have a lot of other projects — little street-end parks, playgrounds, trails and park connections, but it’s exciting to see people forming larger groups working together to tackle bigger issues, rather than individual groups trying to figure it out on their own. 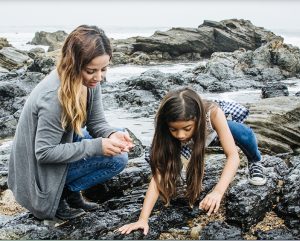 A woman and child explore a tide pool, an example of Emerald Alliance’s educational activities that aim to build appreciation for ecology and the natural world. Emerald Alliance is a project of the Seattle Parks Foundation.

Photo, top of page: Ecological Workforce Initiative, a project of Inquiring Systems Inc., runs a worker certification program in ecological protection and preservation. The program helps trainees acquire a high degree of technical knowledge, skills and experience that will qualify them for good-paying jobs.