“So there was the pandemic…” 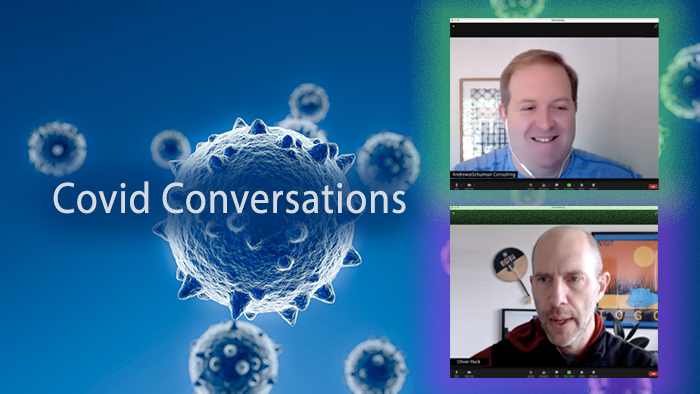 Andrew Schulman, top, and Oliver Hack have been co-hosting and moderating the weekly online forum for almost two years.

Covid Conversations began in April 2020 as a way to keep fiscal sponsors nationwide connected as the new, terrifying, pandemic swept across our sector, creating organizational confusion and fear.

“So there was the pandemic,” recalled Oliver Hack, Social Good Fund’s director of fiscal sponsorship, “and there was the government’s response to it, the PPP loan specifically.”

Hack was reminiscing about the weekly forum’s origins a year and a half after its launch, during a meeting to discuss the future of Covid Conversations, which he and fiscal sponsor consultant Andrew Schulman moderate.

“My team at Social Good Fund was spending an incredible number of hours trying to figure out how PPP worked, how to approach it, and it occurred to me we couldn’t be the only one suffering. I wanted to hear how other fiscal sponsors were thinking about this. Were we missing something? What was going on here? Because it seemed awfully complicated.

“I called Andrew and asked, ‘Can we put together a Zoom meeting with other practices to discuss the PPP loan?’ It came together quickly, with 60 people nationwide registering to attend and almost 40 showing up.

“We were all struggling with the PPP, but some in the group already were diving into the nitty-gritty of the loan, trying to understand even the language used. And then, of course, to apply the loan as a fiscal sponsor was very complex.

“But we did it, we got through it together,” Hack said. “Most of us who applied for the loan got it and most got it forgiven. After that, people seemed to want to keep getting together. There were lots of topics worth talking about so we thought, why don’t we give it a try, see how we can make a difference, if any? The fact that we have 30 people on this call right now, a year and a half later, says it’s meaningful to people.”

Schulman, who worked for for nonprofits and fiscally sponsored projects before starting his consulting firm in 2015, told the Directory he also wasn’t sure how the Zoom meetings would be received.

“Oliver and I assumed from the beginning that people came mostly for the learning,” Schulman says, “but one of my main takeaways from these sessions is that the community component — spending time with other practitioners and making real connections — is as important as the learning, if not more so.”

To join the meetings, free to all staff members of fiscal sponsor organizations, register here.

NOTE: June 21, 2022, Schulman announced that the forum’s name was changing to Fiscal Sponsor Conversations. That was also the forum’s 100th meeting, and he added that since its first session, almost 350 people from 130 practices in 26 states had attended at least once.