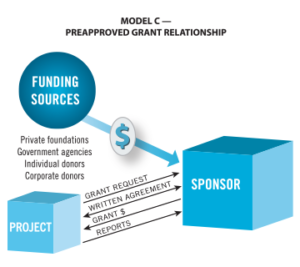 More than half the sponsors in the Directory practice Model C, the preapproved
grant relationship.

The 342 sponsors profiled on the Fiscal Sponsor Directory joined after answering a survey about their experience, eligibility requirements, fee structure, services and philosophy — enough information that prospective projects can get a feel for which fiscal sponsors might make a good fit for them.

The Directory, launched in November 2008, has grown to be the largest database of essential information about individual fiscal sponsors. It includes most major players and an increasing number of startup sponsors.

These sponsors operate in 42 states and the District of Columbia, Puerto Rico and Canada. California has the most, 114, a third of the total.

Fractured Atlas in New York City is the largest fiscal sponsor with 4,000 projects. It operates only online and practices only Model C fiscal sponsorship. 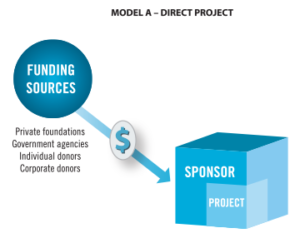 Model A, the direct project, is practiced by 135 sponsors listed in the Directory.

GROWTH: Mirrors the rise of nonprofits
Before the 1950s, only 152,000 501(c)(3)s were operating in the United States. The pace picked up in the 1970s and ’80s, adding roughly 190,000 new nonprofits in each decade. But numbers of brand-new nonprofits almost doubled, to 372,000, in the 1990s. The National Center for Charitable Statistics reports that there now are 1.54 million U.S. nonprofits. (The Covid-19 pandemic’s effect on the nonprofit sector hasn’t been tallied nationwide, but the National Council of Nonprofits website has links to state-by-state reports.)

Fiscal sponsorship, on a much smaller scale, has followed the nonprofit growth trajectory. Starting in the late 1960s and into the 1970s — when community programs began to soar as the free-services-for-all concept took hold in California and spread throughout the nation — the need for cost-efficient financial management grew, and the business model gained currency.

New fiscal sponsors jumped in the 1990s. That’s when 50 of the sponsors in this Directory — more than double the number of startups in each of the previous two decades — took on their first project. The pace of new fiscal sponsors has accelerated, with 231 Directory participants, or 67%, forming since 2000, a percentage that has been rising as the Directory continues to add fiscal sponsors.

SCOPE: 17,331 projects
Fiscal sponsorship is increasing throughout the United States, a fact that is reflected in the Directory. Last year, 23 sponsors joined this resource, and dozens of sponsors already profiled reported sizeable jumps in their number of projects.

The Directory’s 342 fiscal sponsors are home to 17,331 projects. More than a quarter of these are housed at Fractured Atlas, but many sponsors’ numbers are modest. More than a third (38%) of the agencies sponsor up to 5 projects, 22% sponsor 6 to 19 projects, and 12% sponsor 50 to 99 projects. The 18 organizations with 200 or more projects collectively sponsor 8,883 projects, 51% of the projects represented in the Directory.

A hidden efficiency for nonprofit board development is suggested by the projects-to-sponsor ratio, which is 50 to 1. The 17,331 projects under their fiscal sponsor’s board of directors don’t need a board of their own to operate, which takes pressure off the pool of volunteer professionals across the country. A truism of community service is that many board members wear multiple nonprofit hats. If each of the 17,331 projects had to have its own 10-member board of directors, approximately 170,000 civic-minded people in communities across the country would have to stretch themselves ever thinner.

ELIGIBILITY: Aligned mission and geography are key
Sponsors overwhelmingly — 86% — say “aligned mission/values” is their chief criterion for accepting a new project. The second most-cited eligibility criterion is “geographic,” with 44% of the sponsors requiring their projects to operate nearby, in the same metropolitan area, county, state or region.

PROJECT CATEGORIES: Arts is tops, new ones emerging
Among the project categories that sponsors are willing to take on, arts and culture, hands-down, is the most popular: 247 sponsors (72%). Education is the next largest category of service with 206, followed closely by youth development at 189, and children, youth and families at 184, a snug third.

In the last three years, sponsors joining the Directory have been adding project categories to those listed on the original join form: LGBTQ, veterans, homelessness and open space/parks. The numbers have increased so much, we’ve added these four categories — a reflection of changing times and needs in our communities — to the form. 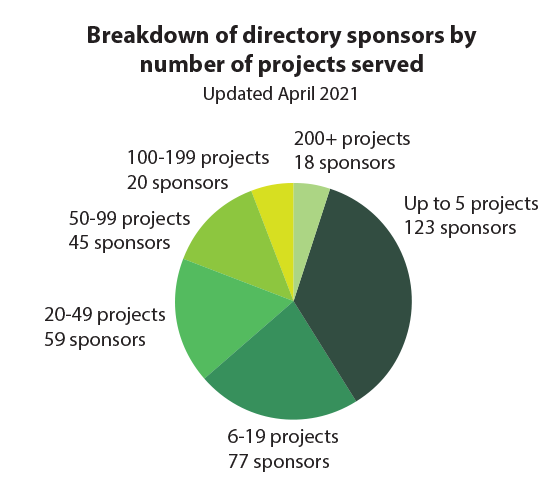 FEES: Most charge 5%-10%
Almost every fiscal sponsor says it charges a percentage of project revenues (96%), and, of those, 71% are in the 5%-10% range. Also, of those with sliding-scale fees, usually depending on a project’s revenues, about a third range from 5% to 10%. Seventy sponsors will charge up to 15% or more, usually to handle government-funded projects, which can require adhering to higher federal audit standards. What mostly accounts for the fee disparity is the range of services a sponsor provides.

SERVICES: Spectrum of assistance
Attorney Gregory Colvin’s Fiscal Sponsorship: 6 Ways To Do It Right, published in 1993 with an updated edition in 2005, a Kindle edition in 2015 and a much-expanded 3rd edition in 2019, is the most significant publication in the field. It changed the nomenclature of the field — from “fiscal agent” to “fiscal sponsor” — helping the culture of fiscal sponsorship evolve and professionalizing the management model from the days, decades ago, when the relationship was called “a trap for the unwary” funder.

Among the sponsors in the Directory, 57% or 195 practice Model C, the preapproved grant relationship. The second most popular scenario, Model A, the direct project, is practiced by 148 sponsors, 43%. Eighty-eight sponsors, 26%, practice both.

The basic service all fiscal sponsors offer their projects is the sharing of their 501(c)(3) charitable status, ensuring donors’ gifts and grants are tax-deductible.

More than two-thirds of sponsors also provide bookkeeping/accounting and bill paying services. About a third handle their projects’ payroll, and half provide organizational development and tax reporting.

The larger, more experienced sponsors tend to offer a spectrum of financial services — all of the above, plus they usually handle insurance and auditing. This explains why experienced sponsors’ fees are on the higher side — more services, more staff time required.

DATA UPDATES
These highlights from the fiscal sponsors in the Directory were updated in April 2021.