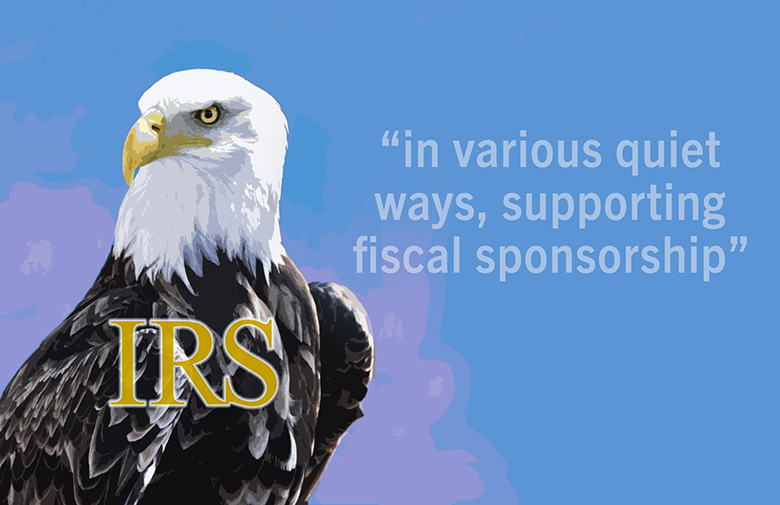 This is part of a series of excerpts, edited by Marjorie Beggs, from Fiscal Sponsor Conversations (formerly Covid Conversations), a weekly virtual discussion forum. In this post, Greg Colvin and Stephanie Petit, co-authors of “Fiscal Sponsorship, 6 Ways To Do It Right,” 3rd edition, discuss the extent of the IRS’ fiscal sponsorship monitoring.

Oliver Hack, forum co-moderator: Greg, you gave an example earlier of something that happened with fiscal sponsor International Humanities Center and how that triggered [an enforcement response]. I think we’re particularly susceptible — if one of our practices goes under in a devastating way, it potentially could affect all of us. So, where do we think the IRS is right now in how it regards fiscal sponsorship?

Greg Colvin: I have to say, and fingers crossed, it’s been benign neglect for the last 30 years, and we’d like to keep it that way. Even more than that, the IRS, in various quiet ways, has been supporting fiscal sponsorship. IRS’ internal training materials tell its agents that fiscal sponsorship is okay. Also, after Hurricane Katrina in 2005, the IRS recommended that rather than start new organizations, those who wanted to raise money for relief and support of displaced people should use existing organizations and set up projects through them.

Other situations, which both Stephanie and I researched, are cases where tax-exemption has been challenged or some other matter came up on an IRS audit, and it used the term fiscal sponsorship to describe what was being looked at. In some cases, auditors said, “You’re not meeting the IRS requirements,” then referred to the same principles that we’ve written about in the book. This is the quiet way that the IRS is handling fiscal sponsorship, and I believe it’s actually something of a relief to them that the sector is policing itself.

I believe it’s actually something of a relief to [the IRS] that the sector is policing itself.

Another thing that’s happened is the IRS’ introduction of Form 1023-EZ. It’s now easier for a small organization to get its own (c)(3) status than it used to be, and that helps take the pressure off the IRS as well. The worst scenario is a major scandal that drives commentators and legislators into accusations that rich people are getting away with something. A major story about how rich individuals are getting big tax deductions for money that’s not doing much good can cause the IRS to feel it has to clamp down to serve the public. But that’s not what fiscal sponsorship is: It’s not serving the rich, it’s serving the rest of us. I think unless there’s a top-down scandal, we shouldn’t have to worry too much.

Stephanie Petit: I definitely agree with you, Greg, that the IRS is not terribly active in pursuing issues related to fiscal sponsorship. Maybe I’m a little more cynical — I think the IRS is extraordinarily underfunded right now and just doesn’t have the manpower to look at a lot of this. It has more pressing issues, certainly in the exempt organization sector. That said, if I were to guess, I’d say state charity regulators are starting to see the IRS not doing a lot and that, instead, it’s on them. We’ve seen this recently, for example with New York Attorney General Letitia James going after the Trump organization and the NRA.

I also think the IRS probably isn’t the sector’s biggest concern regarding more regulation. My hunch is that if there is more regulation, it would come from the attorneys general of various states. They may do their own thing, but they talk and look at what others are doing. The best thing we can do, I think, is to continue practicing fiscal sponsorship in the right way and showing examples of all of its great economies of scale and achievements, and how those outweigh any bad actors who may be out there.

Greg: Yes, and I want to add, there’s one other important legal principle in fiscal sponsorship reflected in the collapse of Media Network and International Humanities Center. It’s the charitable trust principle that is enforced by each state’s attorney general, not by the IRS. When you receive money — and all of you doing fiscal sponsorship receive money for multiple purposes from multiple donors — that money, when you have it in hand, is impressed with the charitable trust for the purpose it was solicited for.

If your money comes up short or you divert it to another purpose, that’s when you really can run into trouble with the attorney general. Stephanie and I have had some long, rather uncomfortable cases where we had to deal with the California attorney general over a controversy about whether the money was spent for the intended purpose or by the intended organization. There’s one IRS, but there are 50 attorneys general. They don’t always sing the same tune or have the same concerns, but some of them are quite sophisticated.

Oliver: Being a fiscal sponsorship nerd, like I am, we could spend a whole day delving into these topics, but I’m thinking, “Yeah, benign neglect, semi under the radar is to our advantage.” But I’m also wondering if we don’t need to get out ahead of it. There’s a lack of nuance in the 990, for example, where you can’t express the full nature of your fiscal sponsorship practice. There isn’t really a tool where we can demonstrate our accountability to the world. I wonder if anyone has thought of ways we can self-organize and propose tools to hold ourselves to a standard so if something comes up, we can say, “Look, we have this”?

Greg: I think we all have to pay attention to our public relations and our press coverage, that’s for sure. Sometimes accountability is accomplished with success stories covered by local media, but also through activities that are pursued by the sector as a sector — the National Network of Fiscal Sponsors, for instance, in maintaining a website with best practices. We can call it ways to do it right, we can call it legal versus illegal. But when it comes down to it, talking to people, whether they’re lawyers or not, about how to manage fiscal sponsorship programs and avoid problems through best practices, that’s how to demonstrate that the sector is succeeding.

I also want to take my hat off to the Fiscal Sponsor Directory’s news stories about successes in New Orleans, Puerto Rico or wherever, stories about how fiscal sponsorship was able to accomplish things that couldn’t have been done otherwise. I think we need to pay attention to covering what we’re all trying to support collectively, not competitively, as a practice. I have great hopes for the National Network of Fiscal Sponsors. Every trade association, pharmaceuticals or automobiles, promotes its image, and that’s what I think the National Network could be doing.

From the meeting’s chat:

Andrew Schulman (forum host and co-moderator): There’s a whole section in the back of the book [Fiscal Sponsorship, 6 Ways To Do It Right, 3rd edition] that goes through the IRS’ legal challenges to fiscal sponsorship.

Erin Bradrick (Principal, NEO Law Group): I love Greg’s “benign neglect” phrase. From the IRS, I think the risk is likely more at an individual organizational level — if you don’t properly oversee your internal projects or your external grants and something goes wrong, there’s a risk. But I think that there’s possibly a greater risk of state charity regulators, like the California attorney general, looking to step in and/or gather additional reporting from fiscal sponsors in general.