Embracing diversity in a pay-what-you-can cafe

September 22 marks the start of a crowdfunding campaign for A Place at the Table, a Raleigh, N.C., cafe breaking ground with its flexible payments for the food it serves. The cafe — appealing to the homeless as well as the affluent — is a fiscally sponsored project of Presbyterian Campus Ministry, also in Raleigh. It’s to open early next year. 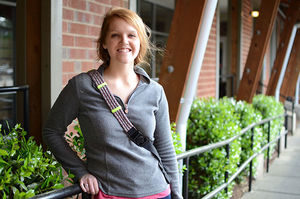 Maggie Kane heads up A Place at the Table, due to open 2016. Photo: Raleigh “Technician”

Ministry member and recent N.C. State University graduate Maggie Kane heads up the progressive project in which patrons can treat others to a snack or meal or pay for their own food by volunteering for an hour — helping the chef, washing dishes, wiping tables, greeting patrons, perhaps serving food. Kane and the chef, the only salaried staff, will oversee volunteers, many of whom are expected to be enrolled at nearby 40,000-student N.C. State.

“If we just provide the place and the food and long, communal tables, and a form of hospitality for people, then I, who grew up privileged, can sit next to Howard, who may have slept outside last night.”  —Maggie Kane

“If we just provide the place and the food and long, communal tables, and a form of hospitality for people, then I, who grew up privileged, can sit next to Howard, who may have slept outside last night,” Kane told Technician, the university’s student newspaper.

All cities today struggle with homelessness. Raleigh, pop. 431,746, estimates that 1,170 were homeless in 2014. To put that into perspective, San Francisco, with not quite twice Raleigh’s population, has five times the homeless.

Kane says that unifying people of different backgrounds is the project’s ultimate goal. “We all coexist and we should acknowledge each other and not look at the other as invisible — and that can go for both sides.”

This experiment in economics and culture isn’t unique. Kane estimates that 50 similar cafes are operating around the United States. At least two of those — Seeds Community Cafe in Colorado and Fareground Community Cafe in New York State — use fiscal sponsors.

A Place at the Table logo.

A 2013 Nonprofit Times article says models in St. Louis, Detroit, Boston, Chicago and Portland, Ore., have met with varied success, mostly because revenue is so unpredictable. An estimated 60% of customers pay the full suggested price of food while 15%-20% leave less or nothing. The cafes also are competing with for-profit restaurants for customers who can or will pay, so staff need to keep food quality and service at a high level.

Kane acknowledges the risks — volunteers must sign waivers and they have no reliable “work” schedules. But the biggest challenge will be raising enough money to cover costs, she says: “Other cafes around the country say that sometimes it is difficult to break even.” Still, she’s moving forward with plans for a January opening.

“We’re launching a few fundraisers in the next few months in hopes that those and the crowdfunding — on crowdrise.com — will jump-start what we need.” She estimates startup costs for the first six months will be more than $95,000, with most — $50,000 — going to build a kitchen.

Presbyterian Campus Ministry has established a separate account for the cafe, with all donations, minus bank fees, going to the project. Kane, enthusiastic about the relationship, recommends fiscal sponsorship without reservation: “It gives you the means, time and opportunity you need to get started,” she says.

“We couldn’t be where we are without Presbyterian Campus Ministry. We could have launched, yes, but we probably wouldn’t have the donations we have now. People want to give but also want to know that it’s safe and secure, being used for good and, in some cases, that they can write it off.”

Donations may benefit its fiscal sponsor, too. “When people go to donate on PCM’s page and see the good work it’s doing, they may donate to the ministry as well.”

The ministry’s history dates from the late 1920s when West Raleigh Presbyterian Church organized to serve N.C. State’s faculty and students. It operates a number of programs, including a weekly Peace and Justice Forum that hosts speakers from various academic disciplines and religions to discuss ethical and moral issues.