A Board’s Guide to Fiscal Sponsorship 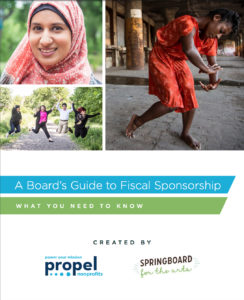 Danielle Gangelhoff, fiscal sponsorship director for Propel Nonprofits in Minnesota, gets a lot of calls from staff and board members of other 501(c)(3)s — local and beyond — asking how they, too, can become a fiscal sponsor. She says she’s surprised by how little they know about the basics, so she gives them general guidance, refers them to resources and encourages them to get legal counsel.

Now she also sends them a link to a free concise primer, A Board’s Guide to Fiscal Sponsorship, which she wrote with John Bell, business manager for Springboard for the Arts, another Minnesota fiscal sponsor, and Adia Morris Swanger, Springboard’s operations coordinator.

Both organizations have impressive credentials: Springboard, founded in 1983, became a fiscal sponsor in 1991 and has more than 200 projects. Incorporated in 1982 as MAP for Nonprofits, Propel has had 86 projects since its first in 2013.

“We tried to make this publication succinct,” Gangelhoff says of the 8-pager. “It’s less a how-to of operations and more a guide of considerations — what you should know at a minimum before deciding to launch a fiscal sponsorship program, including the risk factors.”

All 296 fiscal sponsors on the Directory at one time had to make that decision. One hung out its shingle as long ago as 1957 — Public Health Solutions in New York City — and another as recently as April 2018, Advancing Science Worldwide, in Arizona.

The Directory asked a few of our newer fiscal sponsors if “A Board’s Guide” would have helped them.

Rithvik Musuku, president and CEO of Advancing Science Worldwide, says he and co-founder Zahir Abdul originally planned to start their nonprofit as a fiscally sponsored project, its mission to increase access to science education by making books, journals, facilities, equipment and other scientific materials available to underserved communities internationally.

They did some rudimentary research about fiscal sponsorship, but, in the end, went for their own 501(c)(3), mostly because they wanted to apply for Google and Microsoft technology grants. Those tech giants won’t give grants to fiscally sponsored projects.

Within months of getting their tax-exemption, a project came calling, asking for fiscal sponsorship: The Disruptors, a podcast by scientists who discuss the future of genetic engineering, manned space travel, AI, automation and more.

“We didn’t want to say no,” Musuku says. “At that point, we knew the general idea of fiscal sponsorship, but we didn’t know much about the specifics and logistics that fiscal sponsors need to take care of.”

Though Advancing Science Worldwide’s board members all were involved in the decision to take on that first project, “A Board’s Guide” would “still be relevant to our board, especially for new members,” Musuku says. He feels the 16 “Questions to Ask” is the booklet’s most useful feature.

A sampling: Do board and staff know enough about fiscal sponsorship to ensure they’re not jeopardizing their 501(c)(3) by taking on this work? Are there any conflicts of interest? What would happen to the project if a 501(c)(3) didn’t take it on? Under what circumstances should the sponsor terminate the sponsorship?

“If an organization can’t answer all those questions, they’re not ready to be a fiscal sponsor.”
— Rithvik Musuku, Advancing Science Worldwide president and CEO

“Those kinds of questions ensure that any fiscal sponsor is ready for the challenge and knows what they’re getting into,” Musuku says. “If an organization can’t answer all those questions, they’re not ready to be a fiscal sponsor.”

Another new fiscal sponsor, VOW Foundation in New York state, came to the work with more experience, but its president, Teresa Woolson, agrees the guide is a useful tool for future, and even current, board members. Woolson founded VOW in 2014, two years after her 19-year-old son, Victor O. Woolson, died from smoking a synthetic drug.

VOW advocates for tighter controls on unregulated synthetic drugs, and has one fiscally sponsored project, taken on in 2017, with the city of Oswego’s D.A.R.E. (Drug Abuse Resistance Education) Program in the city’s public schools. VOW sponsorship covers a celebration for students’ completion of the 10-week program.

“I’m employed in a nonprofit economic development organization that was a fiscal sponsor for a local children’s museum for a short time,” Woolson says, “so when I was ready to start my own nonprofit, I had the knowledge to do it [fiscal sponsorship].”

She educated her board members, but the guide would have made that easier, she says, and she plans to share it with her current board as a brushup. She also has taken to heart one guide question: “Do we have the capacity to take on the extra administrative work?” The all-volunteer VOW only considers small projects in Oswego County, N.Y.

“I’ve declined requests for fiscal sponsorship that were too large to undertake,” she says. “I stay under the $50,000 income limitation so the reporting paperwork to the IRS is only a postcard.” Tax-exempt organizations with annual gross receipts normally $50,000 or less can file a simple Form 990-N postcard instead of a full 990.

Such feedback, plus the phone queries about fiscal sponsorship Gangelhoff continues to get, reinforces her perception that the guide was a needed resource. Another was a December 2017 article in the local daily Twin Cities Pioneer Press: “Dayton’s Bluff Community Council plunges into financial turmoil.”

The council in Dayton’s Bluff, a southeast neighborhood in St. Paul, was “one of the most ambitious councils in the city,” says the article. Its 2017 budget was around $300,000, and it not only operated three nonprofits, it was a fiscal sponsor for a half-dozen projects.

But by late 2017, it had only $308 in its checking account. Creditors and staff were unpaid. One fiscally sponsored project wanted to terminate its relationship immediately and asked for its $24,243 balance. The council’s board of directors put the executive director on unpaid leave and laid off all staff. Fiscal mismanagement included using restricted funds, but it’s unknown if the board knew that was happening — or even that using such funds was prohibited.

A carefully worded Fiscal Sponsorship 101-type publication like the board guide might have helped the council avoid its ordeal.

So far, Propel Nonprofits and Springboard have promoted their publication, completed in December 2018, only via social media, tweets and emails, Gangelhoff says.

With its focus on potential risks to a sponsoring 501(c)(3) and questions board and staff can ask about their organization’s readiness and suitability for fiscal sponsorship, the guide could gain a wide audience, especially among wannabe sponsors, funders and others in the nonprofit sector.