Rules of the game changing
as platforms come, go, evolve

In this second installment of our crowdfunding series, we look at sample campaigns and follow where the money goes. 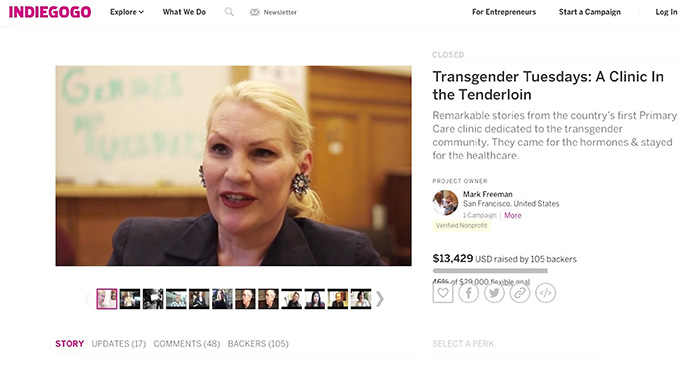 Unlike a project’s Website that serves as a platform for raising money with a donate button linked to a fiscal sponsor’s bank account, a crowdfunding platform is most always a for-profit operation, designed, for a price, to funnel many donations to a campaign — any cause that has its own page on the platform’s site.

Crowdfunding donations go not to the platform but to the fiscal sponsor through a third party like PayPal or a credit or debit card. The fiscal sponsor manages the campaign and receives the money directly so donors get a tax deduction. The sponsor allocates the contributions to the project, minus platform, transaction and fiscal sponsor fees. Combined, these typically total 15%-20%.

Here’s an example:
SOMArts, a San Francisco arts venue and fiscal sponsor, administered a successful Indiegogo campaign for one of its 10 projects, Bay Area Society for Arts & Activism, which advocates for a collective of intergenerational artists.

“BASAA started the campaign in January 2015 with the goal of raising $3,000 for general programming,” said Debra Bok, former SOMArts fiscal sponsorship manager. “For us, it was a really easy process. Indiegogo helped us set up the campaign, with SOMArts approving the site and acting as the administrator of the PayPal account.”

Indiegogo even sent the tax-deduction acknowledgements, a service that it rarely offered, but one that saved some work for SOMArts. BASAA Director Elizabeth Travelslight followed up with thank yous to the donors, Bok said.

Travelslight says BASAA brought the campaign idea to SOMArts. She agrees that setting it up was easy, but there were challenges that a development professional on her advisory committee helped with.

“It’s the asking and reminding and the re-asking and re-reminding that takes time and often unexpected amounts of emotional fortitude,” she says, plus the income has to be managed, which is labor-intensive. “The platform takes several forms of fees. Our sponsor takes its fee. The math can get tricky. Tracking the donations and actual funds takes some time.”

Still, she adds, “A campaign is expected to be an emotional roller coaster.”

Travelslight started a second crowdfunding campaign with Indiegogo’s Generosity platform, an annual membership drive that also was administered by SOMArts. By early 2017, 12 months into the campaign, BASAA had raised $3,167 of its $4,500 goal.

Crowdfunding changes, consolidations
Indiegogo claims to be the world’s first crowdfunding platform and to have raised more than $1 billion since it launched in 2008, primarily for creative and entrepreneurial projects. It charges a platform fee of 5% of the total raised, plus credit card processing fees of 3% plus 30 cents per transaction. The platform won’t permit campaigns that raise funds for activities that are illegal, harm people or property, or scam others.

Like many online services, things change fast, and crowdfunding is no exception. Indiegogo was a popular crowdfunding site with nonprofits. They could post “Verified Nonprofit” in a discreet box atop their campaign page, indicating donations would go to a legitimate tax-exempt organization. Indiegogo also encouraged charitable campaigns to check out its Generosity site that charged no platform fee, “so more money goes straight to the causes you care about most,” according to its pitch.

But Feb. 1, Indiegogo cut off all nonprofit campaigns that were counting on tax-deductibility to draw donors, directing them instead to YouCaring, its new, “exclusive charitable crowdfunding partner,” according to Indiegogo.

“Raising money for nonprofits has a very specific set of needs,” Indiegogo CEO David Mandelbrot told TechCrunch Jan. 25 “and it was getting harder to meet them given our growth in [the entrepreneurial] parts of the business and our focus there.” However, he didn’t say what those needs are.

YouCaring says its all-encompassing focus is on personal, global, individual or organizational causes. But, when the Directory asked YouCaring about working with fiscal sponsors, a support team member responded by email: “This is not something YouCaring participates in,” and referred us back to the Indiegogo support team. Indiegogo, in turn, pointed us back to YouCaring.
It took a few more emails — and some educating of YouCaring’s support staff about what fiscal sponsorship means — to get an affirmative response. Yes, the site “welcomes fiscal sponsors who are funding on behalf of charitable and compassionate causes,” wrote another staff member.

The site charges no platform fee but takes the typical 2.9% plus 30 cents for each transaction. YouCaring says it manages to stay in business without a platform fee because “at times, we do receive financial support from our amazing processors and other partners.” Also, campaign donors can add a voluntary contribution to the site, helping it “to bring life-changing philanthropy to as many people as possible.”

“Transgender Tuesdays”
Since Indiegogo has opted out of charitable campaigns, YouCaring is likely to see an uptick in its documentary fundraising niche, with films like the following heading its way:

“Transgender Tuesdays: A Clinic in the Tenderloin,” a 60-minute documentary about the first-ever primary care clinic for the transgender community, was fiscally sponsored by SFFilm. In 2012, the doc was added to the sponsor’s 100 Indiegogo campaigns, which had brought its projects $462,902.

“We were already in production when we mounted the Indiegogo campaign to help finish the film,” says the film’s producer, Mark Freeman, a San Francisco nurse practitioner who founded the clinic. “We’d done all the initial interviews, but no B-roll [supplemental or alternative footage] and hadn’t collected music or video and still clips or shot environments yet.” His campaign brought in $13,429, less than half his goal, but he raised an additional $11,000 from house parties and $5,000 from an AIDS Healthcare Foundation grant.

“It took basically six months to do the crowdfunding, preparing videos to put up, asking people with big Web presences to support it in advance,” he says. “I think the campaign was online six weeks, and then there were the thanks and fulfillments.”

“Fulfillments,” or thank-you gifts, for this campaign ranged from listing the donor’s name on the documentary’s Web page for a $3 donation — 20 people donated at that level — to an executive producer credit on the film for $3,000. One person claimed that perk.

“Would I [crowdfund] again?” Freeman asks. “Yes, it was the most successful part of our funding, even though it was more work than the three house parties.”

A 10-minute excerpt from Freeman’s film is still posted on the Indiegogo campaign page.

Sample flow of money
Seed&Spark, a crowdfunding platform for film projects, currently is running campaigns for seven fiscal sponsors — Film Independent, International Documentary Association, The Film Collaborative, Southern Documentary Fund, Cinefemme, Northwest Film Forum and Pitch Her Productions — and even has an FAQ section on its site specifically for fiscal sponsors. Here’s how the money flows in Seed&Spark’s process:

Marjorie Beggs is the Directory manager.