A 16-foot-tall bronze statue of Confederate Gen. Robert E. Lee is lifted from its 60-foot pedestal at the center of New Orleans’ Lee Circle in May 2017. Photo by Abdul Aziz

At the National Network of Fiscal Sponsors’ annual meeting, in a cradle of the Confederacy, the Foundation for Louisiana shared the challenges it faced when it stepped in to help New Orleans Mayor Mitch Landrieu “choose a better future” for the city, starting with the removal of public tributes to a terrible past.

The foundation, a fiscal sponsor, stepped in to help the city remove four statues that honored the Confederacy and white supremacy. As fiscal sponsor, the foundation was able to protect the identities of the people and organizations that funded the effort and helped safeguard the people who removed the statuary in ways that the city government could not.

“The most difficult work you can be engaged in in America, is discussions about race.”
— Flozell Daniels, Executive Director, The Foundation for Louisiana

More than 150 years since Confederate army commander Gen. Robert E. Lee surrendered at Appomattox, Va., loyalty to the “Lost Cause” still runs deep in Louisiana and across the country.

“The most difficult work you can be engaged in in America,” foundation Executive Director Flozell Daniels said in a welcoming speech at the Oct. 26-27 NNFS meeting, “is discussions about race.”

The foundation’s original mission was to assist in rebuilding the city after Hurricane Katrina in 2005. It took on its first project in 2007. But after about five years, Daniels said, it became evident that it was important to focus more on the root causes of the needs it was trying to address: to reduce vulnerability and increase opportunity, particularly for people of color.

As fiscal sponsors, he said, “We spend a lot of time trying to fix individuals, when it’s the system that’s the problem,” he said. “It’s hard to decide where to start.”

In response to a white supremacist’s murderous attack on a South Carolina church in May 2015, Landrieu took on a cause activists had long championed: the removal of monuments that honored Confederate leaders and the legacy of slavery they fought to preserve.

Alfredo Cruz, foundation vice president of programs and social initiatives, said: “The board decided this was a bigger mission focus to tackle. The monuments became big symbols of the different ways people are oppressed, that perpetuate conditions of their life.

“Our mission now statewide is to reduce vulnerability, build more sustainable communities, learn how they’re impacted and how to engage,” said Cruz, who led an NNFS workshop discussing the project to realize the mayor and City Council’s decision to remove the four offending monuments. 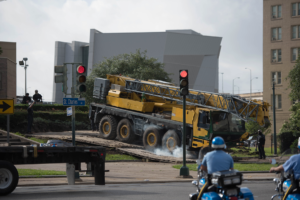 Contractors, confronted by threats, harassment and outright violence if they carried the city of New Orleans’ directive to remove Confederate statuary, concealed their identities and also required police protection as they worked. Photo by Abdul Aziz

The latter was a group of several thousand, most of them Confederate army veterans, who for three days in 1874 overthrew the Reconstruction-era Louisiana government, then based in New Orleans, and its integrated police force. The 1891 monument to the short-lived “Battle of Liberty Place” insurrection had become a rallying point for David Duke and the Ku Klux Klan.

In New Orleans, with its majority African American population, the monuments ꟷ in place more than a century ꟷ are “symbols of oppression, hurtful to the black community,” Cruz said. 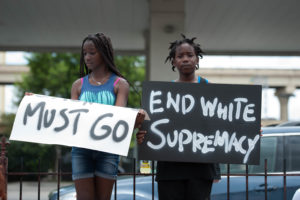 The decision to remove the Gen. Lee statue and three others from New Orleans streets brought out demonstrators both in support and opposed to the effort. Photo by Abdul Aziz

Mayor Landrieu isn’t the only public official to take such a position in the wake of the Charleston, S.C., murders. That state legislature quickly voted to take down Confederate flags from Capitol grounds, and efforts to remove Confederate flags and statues from other public spaces have gained momentum.

But it soon became apparent that the project wasn’t going to be easy. In January 2016, a $200,000 Lamborghini belonging to a contractor who had planned to do the work was burned one night, a week after he had received death threats and pulled out of the contract.

“There were donors who wanted to be part of this historic moment,” Cruz said, but “intimidation was preventing participation.”

The Collaborative Endeavor Agreement between the city and the foundation allowed supporters to avoid the publicity that would attach to directly working with the city.

“Never did we imagine that we’d have to lawyer up, but it became clear that, aside from intimidation tactics, there would also be a legal front,” Cruz said. “The whole foundation for the fiscal sponsorship agreement was legal protection and security protections of donors. We were asked to be fiscal sponsors to manage private and philanthropic resources.”

The foundation also soon found itself meeting with Homeland Security teams “to ensure we understood our own risks and how to mitigate those risks,” Cruz said. Steps they took included removing signage from their office space, disabling the comments capacity of its social media portals and paring back on the typical ease of access the foundation provides by listing staff cell phone numbers on its website.

The foundation also ran in-house workshops in how to deal with an “active shooter.” Louisiana, Cruz reminded, is an “open-carry” state.

“I feel responsible for putting them (foundation staff) at risk,” Daniels had said. “Everyone felt we were doing the right things, we just need to be safe.”

Contractors disguised their vehicles and wore masks at times as they worked. The FBI, via the city, counseled the foundation on persons of interest, not from Louisiana, who made their way to New Orleans to protest the removals.

From the initial estimate that a $170,000 grant would be sufficient, the cost ultimately ballooned to $1.5 million.

“Our role was to ensure that a contractor selected was paid,” Cruz said. Citing the city’s Disadvantaged Business Enterprises policies intended to boost minority-owned contractors, he said, it was important that the foundation step in where bureaucracy might delay their payments. 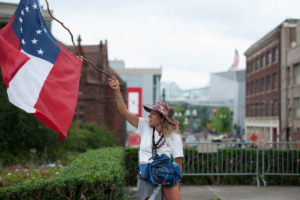 This woman was only one of many — some of whom had traveled hundreds of miles to New Orleans — to protest the removal of statues that honored Confederate leaders and white supremacist Reconstruction-era fighters. Photo by Abdul Aziz

“The Civil War is over; the Confederacy lost, and we are better for it,”
—New Orleans Mayor Mitch Landrieu

“National donors couldn’t move fast enough,” Cruz said. The Rockefeller Foundation supported the project and thousands of smaller donations poured in, too. One promised gift, of $400,000, still hasn’t arrived, he said, and the foundation is still in the hole, but “we would do it all over again. We didn’t make any money, It cost us, but the leadership capital we gained is tremendous.”

Another legal challenge the foundation as fiscal sponsor effort faced was from media outlets demanding to know who was funding the monument removal project.

“We were named in several stories that had a negative view on the removal of the monuments,” Cruz said, and early on the foundation was asked to identity funders and challenged in court based on public-records transparency requirements. But given that the foundation was paying the contractors directly and using private funds to do so, it wasn’t required to disclose the donors’ identities.

The city’s expenses were limited to providing some security at the work sites, much as it does for parade routes and sporting events. 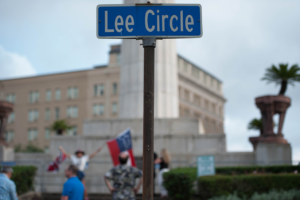 Although the statue of Gen. Robert E. Lee has been taken from its 60-foot pedestal, the Confederate army commander’s name remains on the street sign. Photo by Abdul Aziz

“There was a misperception of the risk, perceptions that the city was being secretive to abscond with the funds,” Cruz said.

“The Civil War is over; the Confederacy lost, and we are better for it,” Landrieu said as the 16-foot Lee statue — the last of the four monuments the mayor had targeted, but far from the last tribute to the Confederacy in his city — was removed from its 60-foot pedestal at the center of Lee Circle in mid-May this year.

The mayor’s office, at press time, had not responded to inquiries about whether there were plans afoot to rename Lee Circle.

For the Foundation for Louisiana, the next conversation will be about how to repurpose the space in a way that works for the entire community.