From New York dancers to Californian environmental activists, fiscal sponsors are confronting the policies of some private foundations and public agency funders that bar them from consideration for grants.

Projects sponsored by Social and Environmental Entrepreneurs in Southern California have encountered such resistance often enough that SEE’s executive director, Jennifer Hoffman, is proposing that the National Network of Fiscal Sponsors, at its meeting beginning Oct. 26 in New Orleans, develop strategies to overcome such barriers. That and other funding topics will be discussed at one of the conference sessions.

“I’m (slowly) hoping to guide the NNFS into forming a task force that will reach out to funders with policies that block or severely limit fiscally sponsored projects from applying,” she wrote in an email to the Fiscal Sponsor Directory.  “A cohesive, well-articulated and tested message from the national level could benefit all fiscal sponsors.”

SEE’s efforts have already forced change at both the U.S. Environmental Protection Agency and a private foundation.

“A cohesive, well-articulated and tested message from the national level could benefit all fiscal sponsors.” — Jennifer Hoffman, executive director, Social and Environmental Entrepreneurs

Fiscal sponsorship is an increasingly key channel through which visionaries obtain tax-deductible financing from high-minded philanthropic organizations and relevant government agencies. But almost 25 years after attorney Greg Colvin established clear guidelines for the nonprofit industry in his book, “Fiscal Sponsorship: 6  Ways To Do It Right,” some funding organizations still are stuck in the past, barring projects using so-called “fiscal agents.”

Veteran sponsors see that as the residue from a 1989 article by John A. Edie, published by the Council on Foundations but no longer available, that deemed such fiduciary relationships “A Trap for the Unwary.”

The Hyde and Watson Foundation, for instance, uses the misnomer in its guidelines for grant applicants: In general, the foundation “does not accept applications … from fiscal agents.” Hyde and Watson staff, like others with such policies, couldn’t explain or justify them, but just say, “It’s always been this way.”

“Everybody does it differently,” said Bill Engel, Hyde and Watson board chairman, who’s been with the foundation for 30 years. “It’s the way we prefer to do business, as long as I can remember. We prefer to deal directly with the grantee.”

The foundation, dedicated to capital projects in the greater New York vicinity, distributed about $5 million last year, he said, but, like most foundations, it gets more proposals than it can fund, policy or no. Hyde and Watson reviews its policies “all the time,” Engel said, but this one has never come up for reconsideration.

Similarly, the Warhol Foundation for the Visual Arts Program states in its guidelines for applicants published on its website: “The Foundation is unable to fund proposals using a fiscal agent.” The policy, Director Rachel Bers said, was in place when she got there, almost a decade ago.

The Warhol Foundation, charged with disbursing the artist’s entire estate and income from its extensive copyrights, this spring funded 45 projects nationwide, with a total of $3.3 million in grants ranging from $22,000 to $100,000.

Likewise, the National Endowment for the Arts won’t fund fiscally sponsored projects, its website says: “An ineligible organization (i.e., one without its own nonprofit status) may not use a fiscal sponsor for the purpose of submitting an application.”

Asked to explain the reasoning behind this position, Victoria Hutter, NEA assistant director of press and public affairs, cited tax code subsection (c) of section 170 of Title 26: The agency can fund a group only if “no part of its net earnings inures to the benefit of any private stockholder or stockholders or individual or individuals.”

When pressed, Hutter was unable or unwilling to explain why that code clause sets a fiscal sponsor apart from any other 501(c)(3) or why the National Endowment for the Humanities does not similarly discriminate. Asked for further explanation and how long the policy’s been in effect, Hutter only suggested contacting the Congressional Budget Office for answers, but it didn’t respond to our inquiries.

Of the projects surveyed, 125 said they’d encountered barriers to funding as a result of being fiscally sponsored.

Trying to rationalize a reason
DanceNYC, with nine local fiscal sponsors helping with the research, in April and August published two studies based on data collected from 1,742 projects: “Advancing Fiscally Sponsored Artists and Art Projects” and “Advancing Fiscally Sponsored Dance Projects and Artists.” Of the projects surveyed, 125 said they’d encountered barriers to funding as a result of being fiscally sponsored.

Lane Harwell, DanceNYC executive director, speculated that the small scale of the individual projects — with annual budgets generally less than $20,000 — might work against them in attracting the attention of a funder. “I would hypothesize that it’s an efficiency of scale,” he said.

One of the nine fiscal sponsors that participated in the studies was the nation’s largest, Fractured Atlas, based in New York.

“A lot of our projects aren’t large enough for a lot of these funders, anyway,” said Theresa Hubbard, Fractured Atlas’ associate director of program operations.

Some foundations they approach are adamant about not funding fiscally sponsored projects, Hubbard said, but sometimes those objections can be overcome. “What we run into more often than not is regionally specific requirements for fiscal sponsors. It’s more about where the fiscal sponsor is.” Midwestern funders, particularly state or regional arts councils or community foundations, often require grantees to have a local presence, she said.

The Foundation Center Library in San Francisco, which has data on at least 120,000 funders, could find just 186 whose database profile includes language welcoming fiscally sponsored projects to apply for their grants, and none with language prohibiting them.

Michele Dilworth, director of Foundation Center West, which operates the library, did not respond to several requests to elaborate.

Emily Katz, director of policy and communications at Northern California Grantmakers, knew of none of its 180 members that won’t grant to fiscally sponsored projects. “We don’t collect that data. It’s not information we keep,” she said, while pointing out that NCG is itself fiscal sponsor for about a half-dozen nonexempt projects.

Hubbard said about 5% of Fractured Atlas projects’ grant applications run into this barrier.

“Not every organization should be its own 501(c)(3), particularly a very small organization where there isn’t much in the way of paid staff and everybody’s stretched thin just getting started. (Fiscal sponsorship) seems to us a very efficient way to get funding to smaller organizations through known entities to administer their funds with integrity and trust.”  — Kary Schulman, Grants for the Arts, San Francisco

“I think fiscal sponsorship is becoming more prevalent in the arts, which is one of the reasons we don’t see a lot of funders that are hesitant to fund our fiscally sponsored projects,” Hubbard said. “When we do run into such funders, we will try to have a conversation with them to explain why it’s frequently a better idea for artists to use a fiscal sponsor rather than form their own 501(c)(3).”

Kary Schulman, head of the Bay Area’s largest arts funder, the city of San Francisco’s Grants for the Arts, agreed: “Not every organization should be its own 501(c)(3), particularly a very small organization where there isn’t much in the way of paid staff and everybody’s stretched thin just getting started.”

Fiscal sponsorship, she said, “seems to us a very efficient way to get funding to smaller organizations through known entities to administer their funds with integrity and trust.”

Turning the tide in California

In California’s heavily agricultural San Joaquin Valley, Hoffman’s Social and Environmental Entrepreneurs has had some success in getting funders to rethink their policies. For instance, she wrote in an email, the Sierra Health Fund, which is distributing nearly $3 million this year to 68 community organizations in the San Joaquin Valley, had a policy of supporting only one project per fiscal sponsor.

They pointed out that the policy discourages worthy startups from seeking fiscal sponsorship at a time when such incubation would benefit them the most. Citing the history of the United Farm Workers in the region as an example of grassroots environmental justice organizations building cohesion and networks, they also argued that Sierra Health Fund’s policy would inhibit such collaboration among otherwise complementary projects. 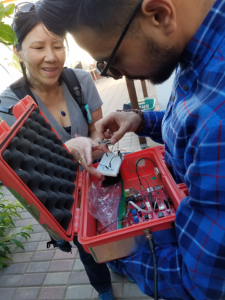 “I am happy to report that our efforts were rewarded with the funder agreeing to remove this restriction from future requests for proposals. They were impressed by the efforts that we made to engage them in an open dialogue and ultimately they were sold on the value of fiscal sponsorship,” Hoffman wrote to the Directory.

Hoffman offered a second successful scenario, this one involving the U.S. Environmental Protection Agency’s outright ban on applications from any fiscally sponsored project.

She said SEE repeated some of the arguments that persuaded Sierra Health Fund and then pointed out that California’s Environmental Protection Agency doesn’t follow the federal policy.

Hoffman said SEE also told the EPA that it was opening itself up to legal challenges with its ban. Fiscal sponsors are all 501(c)(3)s, SEE’s reasoning went, so it was a contradiction for EPA to welcome 501(c)(3)s to apply for grants but not be open to fiscal sponsors, which also are tax-exempt under that IRS code. Thus, the EPA was discriminating against a class of nonprofits.

EPA Director of Environmental Justice Matthew Tejada, Hoffman reported, informed SEE that its arguments had convinced the agency to rethink its policy ꟷ but only allow one project per fiscal sponsor. SEE has yet to revisit that topic, Hoffman wrote, “not wanting to push our luck with such a large win at a national governmental level.”

Tejada, still working in that capacity for the EPA, wrote Fiscal Sponsor Directory that, “Our RFP had been written previously to limit attempts by larger national or regional organizations from applying for the grants under the guise of supporting community based organizations, which from experience is not usually a successful endeavor, even when it is done honestly.

“An unintended consequence of this, however, was that community based organizations operating under a fiscal agent created for specific purposes of administration support, etc., were also excluded from applying. So we altered the RFP to try to make sure that community organizations operating in this manner could still apply and compete for our grants.”

In a more recent case, Hoffman wrote, a project that has been granted 501(c)(3) status but is not ready to leave SEE’s support risked being denied a grant because it is still fiscally sponsored. SEE devised a work-around in which the 501(c)(3) opened a bank account and subcontracted the work to its earlier incarnation.

“This will allow the independent entity to avoid the associated costs of spending the grant funds directly,” Hoffman wrote.

“I feel this creative work-around is so unnecessary if the funder were to just listen to the benefits of fiscal sponsorship,” she said.