In what are among the first prosecutions anywhere for the unlawful sale of e-cigarettes — a delivery system for nicotine especially popular with kids — 15 San Francisco retailers have been cited in police sting operations targeting sales to minors.

Using underage decoys last fall, at the urging of the S.F. Department of Public Health’s Tobacco Free Project, police tested 80 retailers’ compliance with a city ordinance that extends regulations against the sale of tobacco to minors to include e-cigarettes. The targeted merchants were selected at random from among the city’s 924 tobacco retailers.

E-cigarettes, which may have as much nicotine as a tobacco cigarette, are widely sold to adults as a safer alternative, and kids seem to be buying it. Two surveys of San Francisco retailers last year found those selling vaping products grew from 357 in January to 458 by mid-August.

The rising popularity of e-cigarettes, which allow users to get a nicotine fix without actually burning tobacco — instead, a battery-operated device ignites a nicotine-laced liquid — has pumped new millions into the always resourceful tobacco industry, and presented new challenges for those seeking to reduce tobacco’s toll on our health.

Last April, San Francisco adopted its Health Code Article 19N, which stipulates that e-cigarettes be treated just like traditional cigarettes in the eyes of the law. 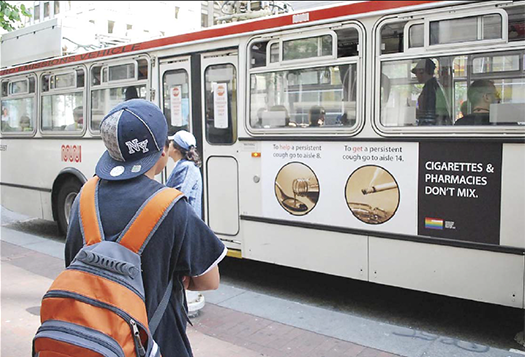 “The reason the citations are new is because the law is new,” says Derek Smith, health educator at the Tobacco Free Project, which supports a coalition of a dozen community groups working for a smoke-free city since 1990. They’ve spearheaded almost two dozen ordinances related to secondhand smoke, tobacco advertising, permits to sell tobacco, youths’ access to smoke products and, latest, where e-cigarettes may be smoked. Tobacco Free is a fiscally sponsored project of the San Francisco Study Center

The SSFPD citation process for selling to minors is twofold: The store clerk is issued a misdemeanor ticket, which can be adjudicated in community court, but the retailer faces the suspension of its tobacco retail license, typically for 20 days. Retailers can contest their citations at a hearing before the city’s director of Environmental Health and, if  ruled against, take their case to the Board of Appeals.

“I haven’t heard of anyone else doing this enforcement,” Smith says. “I’m not aware of another community that has worked with the local police or sheriff’s department to do a decoy operation.” Selling e-cigarettes to minors, however, is barred in 42 states.

Of the 15 San Francisco retailers cited for the selling violations, two appealed their license suspensions and were denied, and four are awaiting their Environmental Health hearings. Others have had hearings and are mulling their options.

A version of this story appeared in the June issue of Study Center’s Central City Extra [https://studycenter.org/test/cce/issues/156/CCX-156-all.pdf], the monthly newspaper that covers the neediest neighborhoods in the heart of San Francisco