Minnesota’s largest school district, Anoka-Hennepin, in 2009 adopted a hands-off policy requiring teachers and staff to “remain neutral on matters regarding sexual orientation” — a follow-up to an earlier school board prohibition on teaching about homosexuality as a “normal, valid lifestyle.”

Such attitudes, the U.S. Justice Department found, enabled the bullying that led to the suicide of nine students — many gay or perceived to be gay — over the next two years.

“Normal Valid Lives” began principal photography July 12. The feature-length documentary by director Gorman Bechard follows the story of the bullying, harassment and anti-LGBT policies in the district and a grassroots group’s fight to end the abuse. Bechard, 56, also co-founded What Were We Thinking Films in New Haven, Conn., which is producing “Normal Valid Lives.” The Film Collaborative in Los Angeles is the fiscal sponsor.

Since 1983, Bechard has directed 16 shorts, features and documentaries, but this is his first film using a fiscal sponsor — he’s used KickStarter “exclusively” to fund the production of his last five documentaries, he says, and most had multiple campaigns, a total of 28 in all. 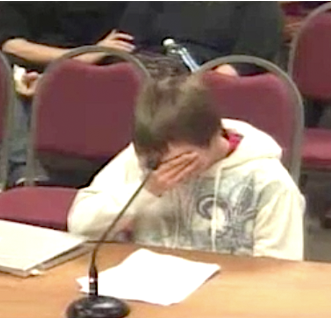 Bullied student breaks down testifying before the school board members who had created the offensive policy. Photo: Screen shot from trailer.

“They were successful campaigns,” he says, “but one disadvantage was that larger backers always wanted that deduction. This film tackles such an important social issue, and Film Collaborative has such an amazing track record of important films — it’s an honor to be in that company.”

And the relationship has paid dividends. His film company, he adds, can now also “apply for certain grants that were always out of reach because of the lack of fiscal sponsorship.”

The film connects the complex dots between the suicides and the district’s current antibullying prevention measures: Minnesota public health officials declared the district a “suicide contagion area.” By officially having no opinion on student wrongdoing, the schools gave tacit approval to the humiliation, enabling bullying to go viral.

“Documentaries have the advantage over news of consolidating complicated stories that unfold over time. The Anoka-Hennepin story is important on so many levels. It shows the devastating consequences of bullying, so many young lives lost over such a short period of time. It’s a tragedy, but it takes a tragedy most times to get things done.” — Gorman Bechard, director “Normal Valid Lives”

“Documentaries have the advantage over news of consolidating complicated stories that unfold over time,” says Bechard. “The Anoka-Hennepin story is important on so many levels. It shows the devastating consequences of bullying, so many young lives lost over such a short period of time. It’s a tragedy, but it takes a tragedy most times to get things done.

“That’s the other side of this story: That people stood up and fought back. Is it perfect now? Is bullying a thing of the past? Of course not, but it’s a major step toward that goal.”

The 5-year-old Film Collaborative is fiscal sponsor to 30 film projects, about half documentary features, the rest feature-length narrative and shorts, multimedia projects and film festivals or screenings. It gives priority to projects, most under $3 million, that can be fully financed by donations and grants or by fundraising for part of the project’s budget, usually development. All projects are Model C.