Local history and politics, environmental concerns, arts news, civic improvement, residents’ accomplishments — such stories and more are lifelines that connect people living on the isolated northern tip of the big island of Hawai’i. That’s what the Kohala Mountain News does best.

Masthead for the “Kohala Mountain News” based on the big Island, Hawaii.

North Kohala, population 6,300, sits below Kohala Mountain, oldest of the island’s five big volcanoes. Residents catch up on the latest local doings from the free, 20-page monthly, in print and online.

“We’re a small, rural, close-knit community,” says Megan Solis, the paper’s former editor and now associate director of its fiscal sponsor, North Kohala Community Resource Center. “But we’re isolated and ‘at the end of the road,’ so our news often doesn’t make it to the larger papers in Hilo and Kailua-Kona.”

Before Mountain News, Solis adds, people got their scoops “through ‘the coconut wireless’ ” — word of mouth, mostly local gossip. “Now the News is a vital part of our community.” It touts itself as “The Best Way to Reach All the Residents and Businesses Plus Most Visitors in Kohala.”

The paper’s $60,000 annual budget employs five part-timers, who work from their homes. They print 3,800 copies a month — every post office box in town gets one. A cadre of volunteer reporters has helped the News grow from its original eight pages to 20, and an impressive amount of advertising makes this community journalism effort self-supporting.

Inside were pieces about how Facebook could help in a Kohala emergency by pinpointing where help is most needed, the dangers of herbicides and alternatives for gardeners and farmers, the North Kohala Community Development Plan Action Committee’s June agenda, a first-person account of a goose that had learned to shoot the tube (surf) in the waves off North Kohala, excerpts from the high school valedictorians’ speeches — “…be fearless. There are going to be opportunities ahead to take chances so you know what? Take them” — and more. 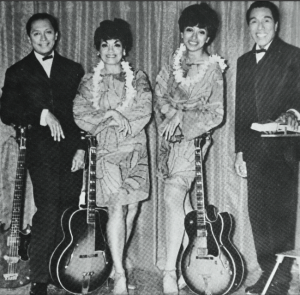 Community history is a regular feature. June’s “Pride of Kohala” was a colorful remembrance of Kohala native Rose Kaohu Moe, born in 1908. The beautiful, accomplished steel guitarist toured the world from the 1930s through the ’70s with her husband, Tau, and, later, their son and daughter. Among the first to perform Polynesian music and dance in every Western European country and on every continent except Antarctica, the Moes also recorded albums and appeared on television and in films. Rose Kaohu Moe died in 1998.

North Kohala Community Resource Center opened its doors 13 years ago to support community improvement projects by helping them develop budgets, funding plans and campaigns, and reporting to the IRS.

The news is a vital part of our community.
— Megan Solis, Associate Director of the North Kohala Community Resource Center

It took on Kohala Mountain News as a fiscally sponsored project in 2007 when it resumed publishing after a 10-plus year hiatus. Most valuable for the paper, Solis says, was that every donation was tax-deductible during the period it was building its advertising base.
The state of Hawai’i has few fiscal sponsors to serve its population of 1.4 million. Staff at the Hawaii Community Foundation said they knew of several other besides the Resource Center: Friends of the Future with 12 projects, Tri-Isle Resource Conservation & Development Council with 46 projects and the Research Corporation of the University of Hawaii, project number unknown.

Christine Richardson, the Resource Center’s executive director, says that as far as she knows, the center is “the only organization in the state that follows Model C from Fiscal Sponsorship: 6 Ways to Do It Right.” It currently has 92 fiscally sponsored projects — from the Angel Fund, which defrays the expenses for life-saving veterinary treatment, to a youth camp for at-risk kids — all providing vital services to the island’s widespread population.

Its newest project is Kohala Radio, “our very first community radio station,” Solis says. “Because of the mountains south of us, we don’t receive any radio signal from the Big Island. We only get Maui stations, and they don’t seem to know we exist!”

The station will offer more than just entertainment: North Kohala residents will be able to communicate in real time, especially valuable during emergencies.