“Fiscal Sponsorship: 6 Ways To Do It Right” 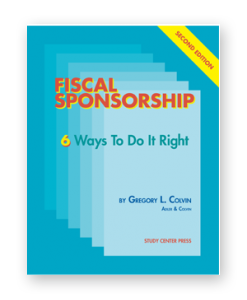 “Greg Colvin’s book is simply the best resource one could want in understanding an important and growing strategy to help small and emerging nonprofit activities.” — Drummond Pike, President, The Tides Center

“There is a right way and a wrong way to go about the use of fiscal sponsorship. Mr. Colvin’s book brings much-needed sunshine and clarity to those who want to do it correctly.” — John Edie, Director, Exempt Organizations Tax Services, PricewaterhouseCoopers

“With IRS audit activity on the increase, it is vitally important for every charity that engages in fiscal sponsorship to know the rules and pitfalls. This book covers them all in clear, understandable language.” — Marcus S. Owens, former Director, IRS Exempt Organizations Division

What Is Fiscal Sponsorship?
Fiscal sponsorship enables a nonexempt charitable project to raise funds and operate through an exempt sponsor who manages the project’s money and reports to funders and tax agencies. Many other administrative services can be provided as well.

Fiscal Sponsorship: 6 Ways to Do It Right describes six models of sponsorship that have been approved and accepted by the IRS. It details how the models work and why, how they differ and how they are similar.

Fiscal sponsorship is a term that is not well understood within the nonprofit world. Until Colvin’s book in 1993, “fiscal sponsor” was widely, and mistakenly, called “fiscal agent,” which misstates the relationship between a tax-exempt organization and any separate non-exempt project that comes under its aegis.

How The Book Came About
Four leading San Francisco fiscal sponsors in the arts and human services (Intersection for the Arts, the San Francisco Study Center, Film Arts Foundation and California Lawyers for the Arts) began meeting in 1991 to collect and share information on sponsorship practices to clarify their legal underpinnings and improve their effectiveness. The meetings and the production of this book were supported by The San Francisco Foundation and The Wallace Alexander Gerbode Foundation.

Benefits of Fiscal Sponsorship
Fiscal sponsorship is an ideal way for nonprofits to operate. It saves money, conserves resources, reduces duplication of personnel, simplifies organizational needs and offers other benefits to service-minded community groups. Nonprofits can utilize fiscal sponsorship to increase service capacity. Foundations that support fiscal sponsorship stretch their grantmaking, and for public agencies it is an efficient way to contract out services.

The Author
Gregory L. Colvin is an attorney with Adler & Colvin, a San Francisco law firm specializing in nonprofit law. Two other books by Colvin (Seize the Initiative and The Rules of the Game: An Election Year Legal Guide for Nonprofit Organizations) are available from the Alliance for Justice.

Fiscal Sponsorship: 6 Ways To Do It Right  2nd Edition

Ordering Information
To order a book please contact us at: E-mail admin@studycenter.org, or phone 415-626-1650

Information we’ll need from you:
Contact name, shipping address, phone number, form of payment. Call us with credit card* information, send checks to the address below. Checks should be made out to Study Center Press and mailed to: Study Center Press, 1663 Mission Street, Suite 310, San Francisco, CA 94103
*MasterCard or Visa